What 2013 Meant for Google: Advertising Revenue Growth and Diversification

Larry Page, CEO of Google, said in a statement:

“We ended 2013 with another great quarter of momentum and growth. Google’s standalone revenue was up 22% year on year, at $15.7 billion.”

So, where is Google making its money, and how has its tactics changed over the past year?

However, although year-on-year revenue is up, year-on-year growth is actually down – with this year’s 19% growth compared to 32% growth in 2012.

Despite this, shareholders are still going to be pretty pleased, with earnings per share being up to over $36 per share.

Advertising revenue grows, but declines as share of income 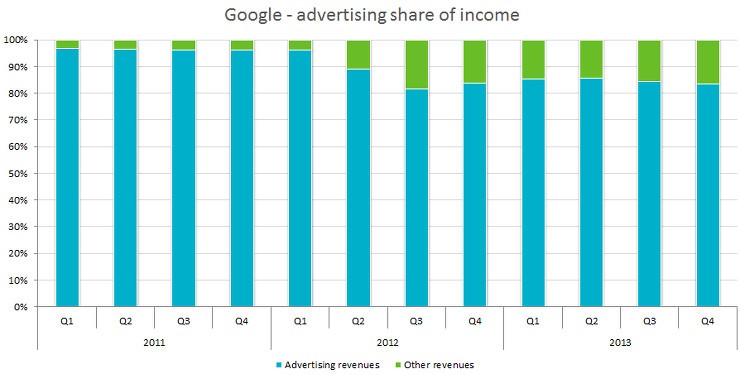 This year, 91% of all revenue is attributed to Google websites and network members’ websites. 91% is clearly a massive majority, but what’s interesting is the 9% that’s now coming from ‘other revenues’ – this is almost double that of last year.

As Larry Page himself says:

“We made great progress across a wide range of product improvements and business goals. I’m also very excited about improving people’s lives even more with continued hard work on our user experiences.”

Having said that, Google did decide to say goodbye to one area of its business: Motorola Mobility. Earlier in the week, Google announced it has sold that business to Chinese computer maker Lenovo.

Want the full stats? Head over to investor.google.com for the full 2013 financial tables with quarterly data.