Site Speed: What Does It Mean for SEO?

On Friday Google made official the news that Matt Cutts had mentioned last year, that website page load times were going to become one of the 200+ factors in Google's ranking algorithms. This is a pretty unusual move from Google - usually (and for obvious reasons) they don't exactly publicise ranking factors in this way. Since it's a pretty headline worthy move, I think it's important to keep a sense of perspective for what this means for website owners and SEOs. Below are a few observations that hopefully make the news a bit clearer.

1. This is Good News for the web. Slow sites are shite.  Everyone hates them.  Mice, keyboards and the occasional monitor worldwide have felt the wrath caused by them.  The fact that Google have taken such a public step of saying it's 'part of their ranking algorithm' means webmasters will sit up and take notice, and start thinking about the fact that their 8.9 second load time just might be a problem. Basically it is a good kick up the arse for site owners, and a good justification to your boss/manager to sign off on some budget to clean up some code on your site.  Google have a lot of power over web development practices, and they are using this to maximum effect in their quest to make the web faster.

2. Google want to reduce load on their own servers. This has always been a factor for SEO – that’s why eliminating duplicate content is good for SEO – if you reduce unnecessary server load for Google, in a sense they reward you with spending more of your crawl budget on your 'money pages'. In the era of Caffeine and an internet that is growing at an exponential rate, can you imagine the efficiency savings Google could achieve if 50% of websites cleaned up their code a bit?

3. Repeat after me. I still need good content and links.  Note that Matt Cutts says site speed is only going to be a factor in 1% of cases – i.e. extreme situations. If you’ve got the best site and the strongest links then a bit of a sluggish server will probably not harm you too much. Conversely this announcement most certainly does not mean that if you strip your homepage down to 3 lines of text with no images, CSS or Javascript or rich media elements so it now only loads in 0.01 seconds then it will suddenly climb up the SERPs! Although you're more than welcome to try - less competition for the rest of us SEOs! ;)  Oh and the first person who starts talking about a "site speed penalty" will get a slap in the face with a wet fish of their choice.

4. Anyone for  Chrome? It's not too far a leap from Google search team's focus on site speed, and the Google Chrome browser, which is undoubtedly a bloody fast browsing experience. If Search puts a spotlight on sites loading quickly then surely that opens the door wider for people to be interested in switching to Chrome? Tenuous maybe but in my view getting more people to use their browser is all part of Google's master plan to learn everything about you, your browsing habits and how likely you are to click on one of their sweet, tasty, golden sponsored links and help the poor startup turn over a few bob for a change.

5. You should have been worried about site speed already! The much bigger reason to improve site speed? It leads to more sales/conversions! People drop off when they have to wait for a page to load. That’s why you should be doing it anyway, and if this news about it being officially part of the algorithm is what forces you into it, then so be it.  I notice that Richard over at SEOgadget has put up an excellent post about the business impact of site speed which I strongly recommend checking out.  For a short and sweet version  I can't put it much better than @tomcritchlow: 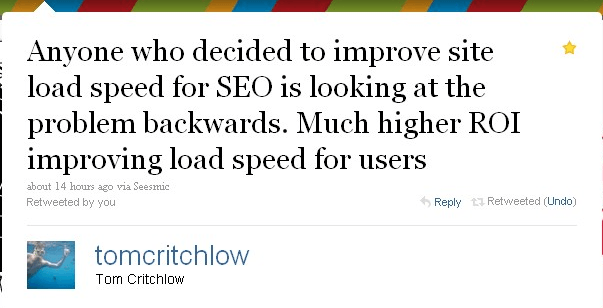 A final thought on how site speed might affect SEO practice. Should SEOs now start including site speed in their reports? I definitely think it should play a part, particularly during initial audits and annual reviews.  But it’s the kind of thing that could easily become an obsession every month based on the false promise that it'll improve your rankings "because Google said so".  In the vast majority of cases I suspect it won't help you rank, although Joost De Valk says otherwise and you've gotta take him seriously.  But it will give you all kinds of other good juju.  Why not start with the tools Google has given you, like the site performance feature in Webmaster Tools, and the Page Speed extension for Firebug.  Then, maybe head over to some well written guides on speeding up your load times.   Then get back to making your site remarkable enough in the first place that its got the kinds of backlinks, rankings and traffic where page load speeds will actually make a difference.