As we mentioned in this week’s digital marketing news, Google has announced a new criteria for assessing what is and isn’t a mobile-friendly website: app interstitial ads that cover a ‘significant amount of content’.

What exactly does this mean for mobile internet users and site owners? Read on to find answers to some of the most commonly asked questions about the update.

On the move? Listen to our podcast. I chat with tecnical SEO director, Mark Chalcraft, about disruptive app interstitial ads and what Google's update means for mobile website owners.

What has Google changed in this update?

As announced on 1 September, Google is now saying that sites ‘should avoid showing app install interstitials that hide a significant amount of content on the transition from the search result page’ to mobile users.

In short, sites that show big ads prompting users to download their app before showing the user the content they expected to see will be considered non-mobile-friendly. This change isn’t strictly a penalty, but instead an expansion of the criteria of what is considered a mobile friendly site by Google.

This change has been expected for a while. Google’s Mobile-Friendly Test tool has already been updated and, as a site owner, you can already use the Mobile Usability report in Search Console to see which pages of your site have this issue.

It’s worth noting that, although the tools have already been updated to reflect this change, it won’t actually affect rankings or visibility in search engine results pages (SERPs) until 1 November 2015.

To be clear, this update refers to app ads that cover a large amount of content on the mobile site. Other types of interstitials – for example, smaller banner ads – will not be affected by the change.

What is an app interstitial?

As defined by Google itself, an interstitial is ‘an advertisement that appears while a chosen website or page is downloading’.

So, by ‘app install interstitials that hide a significant amount of content’, Google means adverts that pop up when a user clicks through to a mobile web page from its SERPs, prompting the user to download an app. The interstitial adverts being targeted are ones that cover all, or a considerable part, of the device’s screen. 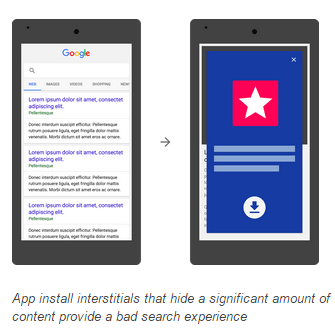 Many mobile sites use these ads to encourage people to download their apps. From a user point of view, apps can provide a better, more personalised experience and can make better use of the native features of a smartphone or tablet than a mobile browser.

From an app owner’s point of view, good apps mean users and customers stay more engaged for longer, giving greater opportunity to increase the lifetime value of that user. So it’s not too difficult to see why many app owners choose to encourage mobile web browsers to download the respective app.

However, the flip side to presenting these large ads is that it creates a barrier between the user and the content they expected to be able to access directly from the SERPs. This, according to Google provides ‘a bad search experience’ – and anyone who has ever been annoyed by an app ad when all they want to do is read the content they’ve been promised will surely agree.

Why is Google cracking down on app interstitials?

Arguably, the driving force behind this decision is similar in principle to Google’s treatment of hidden content; the search engine wants its users to see the content they have searched Google for, without having to take extra steps to access it when they land on the page they’ve clicked on.

In Google’s own words:

‘Our analysis shows that it is not a good search experience and can be frustrating for users because they are expecting to see the content of the web page.’

This analysis comes off the back of a case study Google published in July 2015 . To summarise briefly, Google reports that displaying an interstitial resulted in high bounce rates, while using a smaller Smart App Banner (more on those later in the post) to promote the app in a less intrusive way led to an increase in one-day active users of the mobile website.

As you might expect, this reasoning hasn’t escaped criticism. Jeremy Stoppelman of Yelp, in an article on Search Engine Land, says it’s in Google’s best interests to stop people downloading apps, as app users are less likely to need to use Google to search for what they’re looking for. In the meantime, Danny Sullivan writes that Google is guilty itself of pushing app downloads onto users when they’re not looking for them – i.e. directly from the SERPs. You can read his article here.

How do I know if my site pages meet the new criteria or not?

Site owners have access to two tools that can help them determine whether their site will meet the new mobile friendly criteria or not:

Does this impact all types of app ads?

No. This update isn’t outlawing all ways of promoting an app via your mobile site. It’s specifically designed to dissuade webmasters from using large interstitials that cover ‘significant’ amounts of the web page’s content. Smaller banner ads that don’t disrupt the user experience will still be deemed mobile friendly.

What are the recommended solutions? 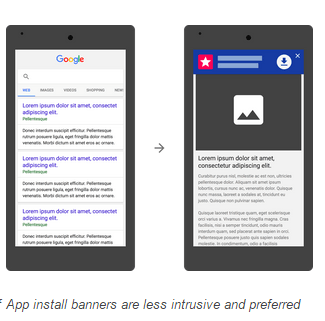 Google is pushing mobile site owners to promote their apps in less disruptive ways, and its preferred method is via app install banners. As stated in the original blog post:

‘As an alternative to app install interstitials, browsers provide ways to promote an app that are more user-friendly… App install banners are supported by Safari (as Smart Banners) and Chrome (as Native App Install Banners). Banners provide a consistent user interface for promoting an app and provide the user with the ability to control their browsing experience. Webmasters can also use their own implementations of app install banners as long as they don’t block searchers from viewing the page’s content.’

How long have I got to fix any problems?

This change will begin affecting mobile search results from 1 November 2015. So, if your site is going to fall foul of the new criteria, you effectively have around two months to fix the issues.

If you’re concerned about how these changes will affect your mobile or responsive website, our technical SEO experts can help. Get in touch today .