The social media trends to look out for in 2018

The way consumers use various channels is constantly evolving, and as a business, you need to adapt to stay in the game.

Here’s our snapshot of the state of social and how we think it’ll play out over the next year.

1. A move into broadcasting

The big players in social have been edging into broadcasting for a while, investing more in live video and original long-form content to keep users entertained for longer in-platform.

Facebook’s goal (and surely that of any social network) is to create a self-sufficient ecosystem that serves its audience everything they need without having to leave. Video has long been at the forefront of the platform’s strategy for growth, with 8 billion average daily video views reported last year. And with 2 billion monthly active users vs . YouTube’s 1.5 billion, and Facebook’s recent hire of Eurosport CEO Peter Hutton to lead global sports rights partnerships, I wouldn’t be surprised if it became the leading platform for video in the next few years.

It makes sense that after experimenting with live streaming sporting events (with much success – 3,500 live sports events were streamed on Facebook in the first six months of last year) the platform has moved onto having a crack at the Netflix model with Facebook Watch. 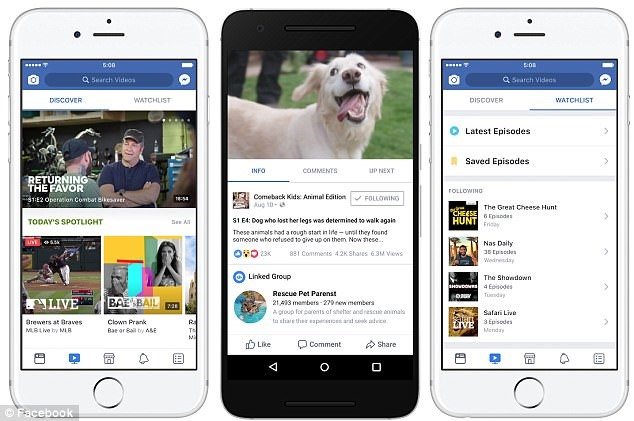 For those not in the know, Facebook Watch is a new TV-like service launched last year in the US that hosts original video content produced exclusively for the platform. This isn’t repurposing existing content or outtakes from shows. This is Facebook’s very own TV channel, with content you’ll find nowhere else.

Watch hosts a mix of documentaries, reality shows, game shows and live safaris from National Geographic and other major broadcasters, to name a few. All viewable on the Watch tab within Facebook. A nice little earner for Facebook in terms of ad revenue, and a whole new world of opportunity for content creation for publishers.

It’s taken off really well over there across the pond, with 40% of Americans accessing the platform weekly , and 24% of those watching content daily. We’ll see how it fares when it comes here to the UK.

It’s not just Facebook that’s moving into broadcasting either. Twitter’s current deal with Sky Sports, showing live Premier League highlights on the platform, could be indicative of things to come, as more social brands park on the lawns of traditional broadcasters.

2. The rise of the ephemeral experience

On the other side of the coin lives the ever-popular ephemeral in-platform experience, seen on Snapchat, Instagram Stories and Instagram Live. Disappearing full screen vertical video with a shelf life of just 24 hours (even less for Live) is in demand by users and brands are taking note.

The rise of Instagram Stories has been huge, with 300 million daily active users. That’s 50% more than the platform it brazenly ‘borrowed’ the idea from. #sorrynotsorry Snap. 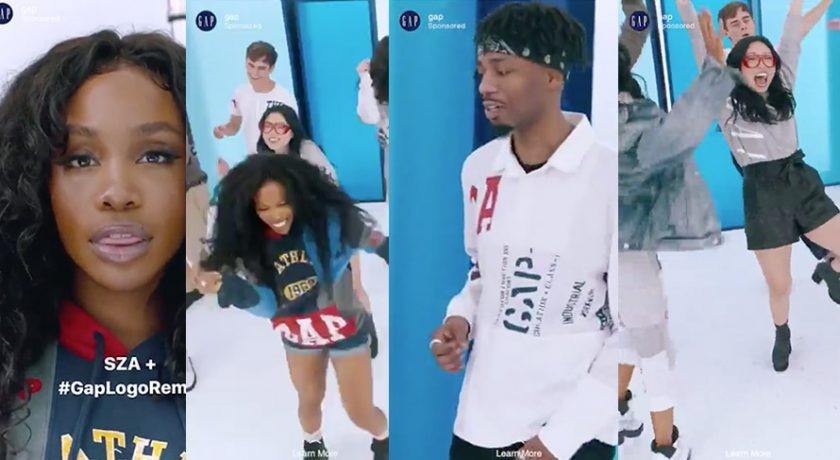 As brands flock to the platform, the recent launch of interactive, swipeable carousel ads for Instagram Stories presents another great opportunity for engaging users with ephemeral content. You can now pin your most popular Stories to your Instagram profile (using Highlights), making sure more people see your carefully crafted ephemeral-come-evergreen content.

And if you wanted to take the ephemeral experience to the max, a live video on Instagram disappears from the feed as soon as it’s finished. But don’t let that put you off going live. It’ll still earn you six times as much reach and interaction as regular videos, with push notifications alerting your followers to your stream even if they’ve not signed up to notifications of your content.

If ever there was a way to keep users in-platform, investing in virtual reality (VR) and augmented reality (AR) makes sense. These platforms envelop the user’s real-world experiences, embedding in their everyday lives on a level well beyond checking an app four times an hour.

But it’s still a bit hit and miss with social apps. Snapchat’s Specs – the platform’s much-hyped smart glasses that recorded straight from your face to the app– was a bit of a damp squib due to a bungled launch (long delay in online availability, no influencer strategy, usability issues and more) and subsequently only 0.8% of its userbase purchasing the glasses.

And who remembers Google Glass? Anyone? OK then.

Then there’s Facebook Spaces – currently in Beta with much to improve according to this hilarious review . The blurb on the Facebook Spaces website says it’s a place to:  “Express yourself. Go live from VR and your friends can follow along on Facebook in real-time. Connect with friends. Make and receive Messenger video calls with friends even if they're not in VR. Share memories. Hang out with your friends and show them your Facebook photos and videos.”

So, it’s basically Facebook then. But an awkward, buggy, unnecessarily complicated version in VR. Zuckerberg recently announced his big vision to connecting a billion people with VR. but it seems VR apps have a long way to go to match the success of Pokemon Go – currently still the most successful VR app – to keep and grow user attention for longer than the first month peak.

4. Algorithmic battles & what it means for paid social

Facebook has long-since stopped serving its users a timeline and, much to the irritation of users, Instagram now chops up feeds with its algorithm too – a move which makes the ‘Insta-‘of the brand name superfluous , if you don’t see a post until two days later. Twitter has followed suit, inserting older tweets it thinks you’ll like, along with tweets liked by users you follow and to put it mildly, reception hasn’t been great .

The algorithm war is here, but platforms will need to temper their desire to over-optimise user experience and risk losing users in the process.

This is part of the reason for Facebook’s recent changes, which followed user complaints about seeing too many brand posts and not enough from friends and family. Timelines had become saturated with clickbait page posts vying for user interaction (‘Tag a mate who does this’, ‘LIKE if this is you’). 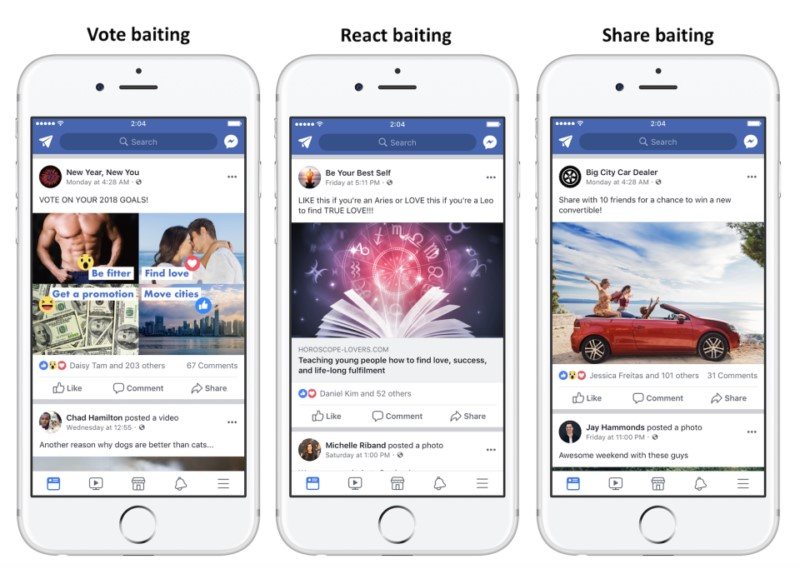 User growth was down 0.1% year-on-year in September, following a decline of 0.9% in August 2017, with Facebook particularly struggling to reach younger demographics favouring other networks such as Snapchat and Instagram.

So what does this mean for paid social?

Facebook’s been squeezing brands’ organic reach for years to push them towards the paid model. The latest algorithm updates, which promise to bring posts from friends and family back to the top of our timelines, are all leading to this goal.

Unsurprisingly, the update will favour live video, and although non-paying businesses will see a reduction in traffic and engagement on their post, those using the ad platform will remain untouched.

While Facebook’s having its latest makeover, Twitter’s ad revenue is projected to grow (and it needs to), as its share price increased by 5% following the announcement.

So if you haven’t already got your paid social ducks in a row, now’s the time to line them up and engage with your audience early in their journey.

Find out how social media impacts the Customer Journey.

Influencers remain arguably the best way around algorithms as they allow you to tap into their already engaged and receptive audiences. Influencer marketing is continually evolving in line with the latest social and technological trends, with a mix of sampling , outreach and ambassador programmes growing beyond traditional paid sponsorships into more long-term partnerships.

But you should choose your influencers carefully and do your research into the types of audiences they reach and their general conduct. A range of sources predict a potential implosion of influencer marketing after a series events undermining consumer trust (Logan Paul et al).

But I think the effect is likely to be less dramatic, and instead we’ll see platforms being more proactive in monitoring content to protect the image of the brand and starve off regulation. Look at Facebook’s link spam squeeze; what goes for Russian bots also goes for influencers. Another example is Twitter’s stricter policy on abusive and violent accounts, and it’s also the reason behind YouTube’s nonsensical change in eligibility to the partner programme for channels with less than 1,000 subscribers, despite the biggest offenders being some of the most popular accounts.

Regulation is a big fear for platforms, so I think we can expect to see more internal hires to supervise their systems, but they also need to develop their monitoring technology to keep up with the sheer scale and size. It’s clear from the scale of abuse that social brands are ill-equipped to deal with misbehaviour effectively.

It’s been happening for a while. LinkedIn’s evolving into a less formal place to be, with the ability to add multiple images to a post , and share video now available on the platform.

It’s been a bit hokey pokey, too. We’ve already seen LinkedIn roll out hashtags, before rolling them back in, and then out again. I think it’ll take on more of a casual approach to ensure it’s less like CV Library and a bit more like a networking meeting where everyone’s just a little tipsy.

But not so much as to embarrass themselves – it’s not Facebook. And it definitely doesn’t have the safety net of Snapchat’s 10-second ephemerality, so post wisely, with business goals in mind, and save the memes for Facebook.

As the platform focuses more on usability and becomes more visually appealing, expect improvements to ads – and lots of them.

7. And the wild card: Google MyBusiness the social butterfly

While Google+ continues to drift, changes to Google MyBusiness have seen the search giant take a fresh foray into social. Despite its presence on the SERP, there’s no doubt that Google MyBusiness is a social media channel and should be treated as such when assessing and planning your social presence.

Brands can post articles, images and even videos, while users can upload content and comment on your pages. For small and medium-sized business, or any business reliant on local trade, Google My Business could be the most important platform in the year ahead.

Find out how our SEO services can help your business flourish.