How to prioritise digital marketing tactics

In this guide, we highlight the key benefits of prioritising tactics, introduce two proven prioritisation models (one simple and one more advanced), plus show you what to do once you have your prioritised list.

The one phrase we never hear a client utter is “I’ve got nothing to do and need more work for my team”. In fact, if anything, it’s usually “Help I’ve got so much to do and don’t know where to start!”.

A common problem for many digital marketing teams is exactly this – there is a huge volume of tactical activity, both ‘BAU’ and new ideas, but not enough time in the day (or people in the team) to do that work.

Many people we speak to have a huge backlog and are working through in order, but often haven’t stopped to consider whether that’s the right order. The good news, however, is there is a solution – prioritisation.

When do you typically prioritise tactics?

The most common time to prioritise tactics is when you have a large selecting of tactics to complete, and there is no immediately clear direction on which to work on first. Equally, if there are a lot of opinions or internal politics around the organisation, it’s a great way of getting everyone to input into how tactics are prioritised.

A few examples of activity that you may need to utilise prioritisation techniques:

Why prioritise your tactics?

Before introducing you to some ways in which you can prioritise tactics, we firstly wanted to outline the benefits of prioritisation. 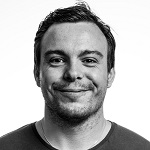 If you prioritise actions more effectively, it will result in undertaking the right work, better outcomes and an enjoyable work flow.

Prioritisation method one: The Boston Matrix

Prioritising a long list of tactical ideas may seem daunting at first; however, there are several established methods to help you make this simple. One of these is the Boston Matrix – a model devised by the Boston Consulting Group originally designed to help prioritise products for development.

The layout of the Boston Matrix

Fresh Egg has taken this model and applied it to the prioritisation of tactics by the two scales of ‘impact’ versus ‘effort’. By adding your tactics to one of the ‘squares’, you can then quickly see how much of a priority it is.

Each of the squares provides you with an indication of the status of the tactic:

This model is based more on ‘gut feel’ rather than any advanced decision making and therefore whilst is a simple way to prioritise, may require some further prioritisation before you fully plan your roadmap of activities.

You will also see that there is a variation of the actual effort and impact levels within each square. Therefore after you have done this initial exercise, you will likely need further discussion to plan the final order.

How to prioritise using the matrix

One simple way is to gather a group of people together, draw up the matrix axis on a whiteboard, list out your tactics onto Post-Its.

You then start to discuss each one in turn and work out which square it best fits, plus whereabouts in the square it should be placed.

Stick each one up onto the matrix and then spend some time sense-checking they are in the right place at the end.

If your group is too large, then there is a danger that the louder people will rule the conversation and the task will seem a bit more arduous (and take a lot longer). In this instance – probably with a group of more than 6-9 people – we suggest splitting people into smaller groups.

These smaller groups can either prioritise their own set of tactics, or they can prioritise the same tactics, then as a whole group, you can compare what people thought.

While the Boston Matrix is a simple and good method to use, you may find that your tactics need to have much more consideration as to their complexities. This is where the Decision Matrix comes in.

The Decision Matrix works by allocating a score against specific criteria for each tactic. Once all tactics are scored, you can then sort these and clearly see which tactics are judged to be the most important to work on.

There are several different variations on criteria typically; however, Fresh Egg has adopted using the following four, generally using a scale of 1-5.

For the first criteria, the scale used is where 1 = ‘most’ and 5 equals ‘least, however for the other three criteria this is reversed, with 1 = ‘least’ and ‘5’ = most. This is because the first criteria are more of a negative factor, and the others are positive. 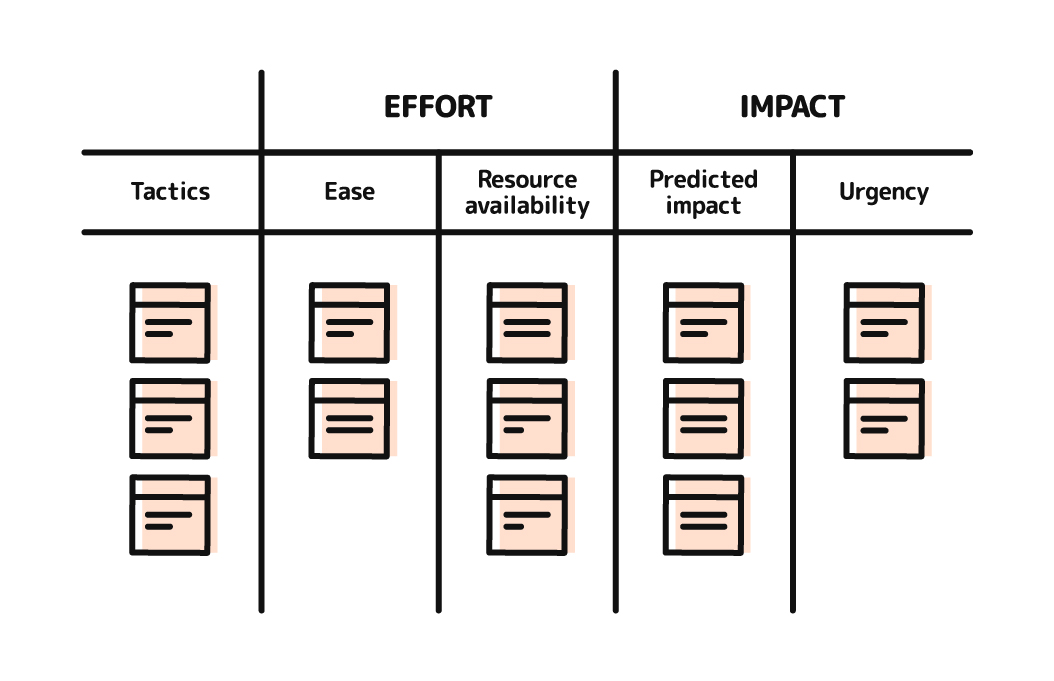 How to create a Decision Matrix

The simplest way to do this is to use Excel or Google Sheets and list all your tactics in one column, then add columns for each of your scoring criteria (plus a ‘total score’ column).

Again, either in small groups or a larger one, you discuss each tactic and allocate it a score against each criteria, then total these up and sort the list from the highest score (highest priority) to lowest.

An alternative method is to get people to score each tactic individually; then these are combined and averaged out to get the score.

To get the most out of the Decision Matrix, it can be useful to swap out the standard criteria and come up with your own set of rules. Doing this allows each team from around the organisation a chance to input into the process and can allow for easier sign-off of tactics once the Decision Matrix has been completed.

We’ve found that this is best achieved in a workshop where stakeholders from around the business can get together in a room and decide on the criteria and weighted scores collectively.

As an example, we recently worked with a large health charity on creating a decision matrix that had input from clinical, offline, content and leadership teams where we workshopped what criteria should be used and the individual weighting of each criteria. Rather than initially being confined to a spreadsheet, this can be done physically using cards and allows the testing of the criteria to be much more interactive.

It’s okay for the criteria to fail the first few times, use the session to get everyone to agree on the criteria and the weighted scores and then give someone in the team the action of creating the Decision Matrix in Excel or Google Sheets for the team to review later.

Video: why prioritisation is important

We offer training in a range of digital strategy methods and techniques, including prioritisation.

Here's strategy director Duncan Heath talking about why prioritisation of digital marketing tactics is so important.

Watch this excerpt from one of the training modules:

What’s next? The Now, Next, Later model

So, you’ve worked on your method of prioritisation you now need to work out when you are going to work on these tactics.

We use a simple method to help plan when the activity gets worked on called ‘Now, Next, Later’. We find it useful to attach a timeframe of completion to Now, Next, Later. As an example:

Once you know the timeframes you can complete tactics in you can begin assigning them to Now, Next or Later and it will give you and the wider team a clear understanding of when the most important tactics will be completed.

If you need some assistance in prioritising tactics, actions or tasks, or feel like you need some fresh thinking for your digital strategy, then do get in contact with us.

Discover our other resources