Want to expand your knowledge on AdWords? In this comprehensive guide, we take a look at the many changes and updates made to Google AdWords over the past year.

Google AdWords allows advertisers to create ads that appear to potential customers across web pages on Google and other search partner sites. Being one of the biggest online advertising platforms, it’s vital that Google AdWords constantly updates its service.

By fully understanding these updates and the way in which AdWords works, your business will be able to improve the performance of your account and ensure that all of your campaigns are running as well as they can be.

In our guide, we cover the six main sets of changes made to AdWords since December 2014. These are:

Upgrades and improvements to AdWords features 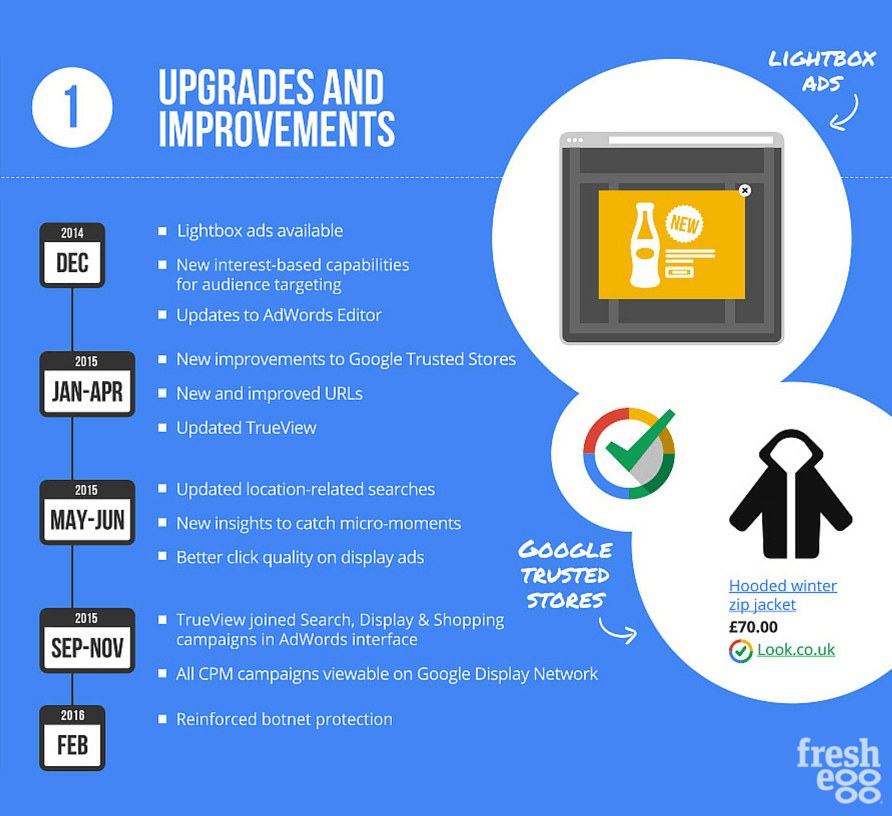 Since December 2014, Google AdWords has made 20 different updates and improvements to its features, from upgrading URLs to new campaign setups.

These new interest-based capabilities are very useful for targeting a particular audience. Targeting ads at the right audience means you won’t be wasting ad spend showing ads to people who are unlikely to be ever interested in what you’re trying to sell.

AdWords also made Lightbox ads available across a range of screens, making it easier to advertise on mobile. AdWords Editor was also updated to include a faster interface, which helps you easily make changes to your account.

During this time period, Google:

Between May and June 2015, AdWords started showing up to four individual businesses for location-related searches. Additionally, new insights were also introduced to help catch micro-moments (mobile moments that require only a very short amount of time to identify and deliver quick information).

As well as this, better click quality on display ads launched, enabling a better experience for both users and advertisers. This means Google now automatically blocks ad clicks that frequently lead to accidental clicks. This way, users don’t get frustrated when they click an ad they didn’t want to click, and advertisers don’t receive an ‘artificial’ click-through rate and aren’t paying for clicks that will never convert.

From September to November, TrueView joined Search, Display, and Shopping campaigns within the AdWords interface, making it a whole lot easier to make changes across campaign types. 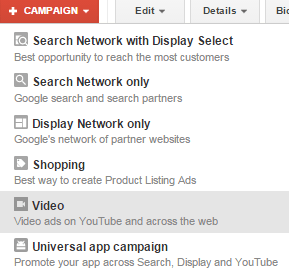 Google AdWords reinforced its botnet protection across ad systems. The updated botnet protection automates the filtering of traffic between three of the top ad fraud botnets in order to improve defence against invalid traffic generated by ad fraud malware. 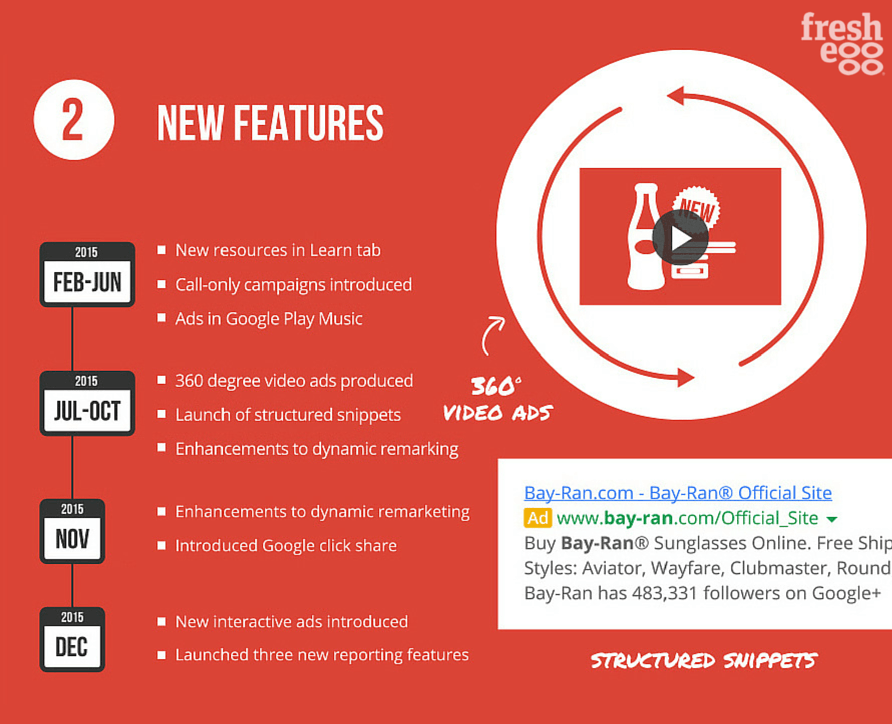 AdWords continued to enhance its interface by adding many new features to fulfil users’ ever-expanding needs and requirements.

Across July and October 2015, AdWords created new 360 degree videos. This exciting video format puts a spin on how videos can be viewed, with viewers given more control about what they actually look at in the video. Viewers can now discover every angle of a video by simply dragging the mouse or moving their finger on the ad. More forward thinking advertisers have started using the format to promote products, so it’s only a matter of time before a 360 ad format is made available.

You can see an example of a 360 degree video ad for Nike Hypervenom football boots below.

At the same time, AdWords launched the structured snippet extension. Structured snippets are very convenient for easily displaying specific features about your products and/or services and are displayed just below the ad copy.

Here at Fresh Egg, we use structured snippets regularly – similar to the example ad shown below, which displays the different styles of bags available.

Furthermore, AdWords introduced several new tools to the Google Display Network, including audience insights. This gives advertisers information about people on their remarketing lists, including demographics, interests, locations, and device usage. Along with this, AdWords made enhancements to dynamic remarketing so that ads can be automatically re-shaped and re-sized to fit all devices. 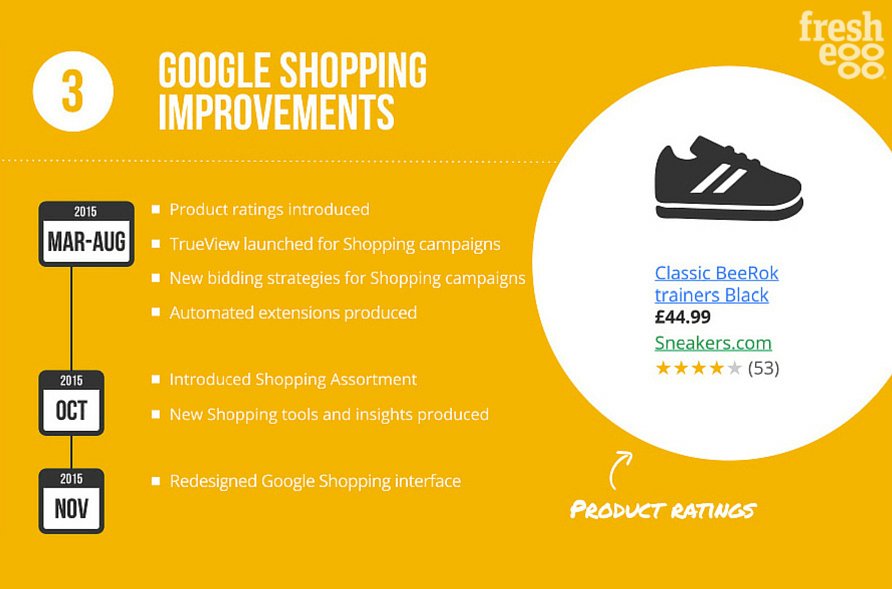 AdWords is constantly making improvements to Google Shopping as it becomes increasingly popular.

During this time period:

In October, Google introduced Shopping Assortment Reports, giving retailers insight into demand for popular products they do not stock.

New shopping tools and insights were also produced, including:

Towards the end of November, the entire Google Shopping interface was redesigned. Now, shoppers can: 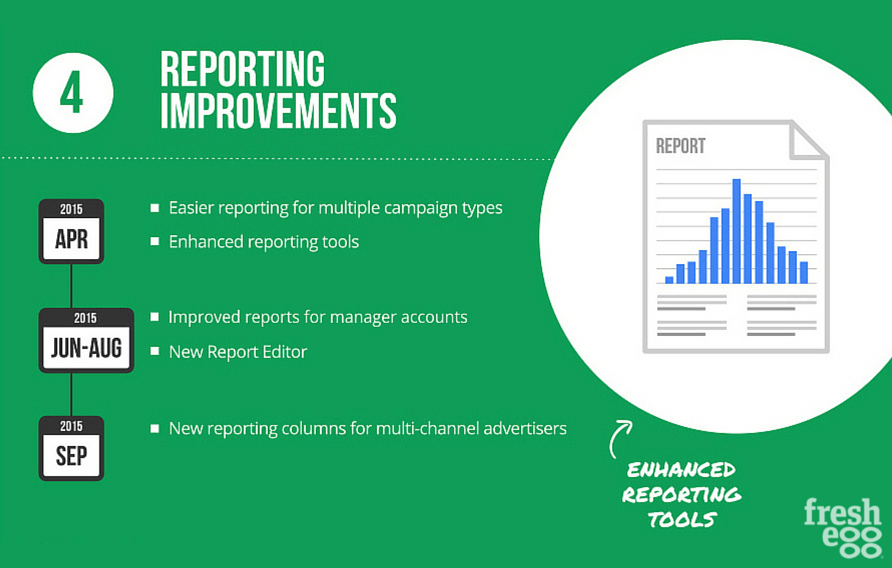 AdWords introduced easier reporting for multiple campaign types, enabling advertisers to have a clearer view of how successful their campaigns are. AdWords also enhanced its reporting tools, including:

Across June and August, AdWords improved its reports for manager accounts, allowing advertisers to create better and more insightful reports, as well as navigate faster between multiple accounts. Besides this, AdWords also helped advertisers view and analyse data instantly with its new report editor. 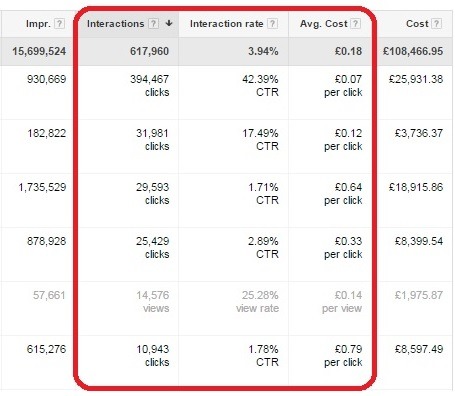 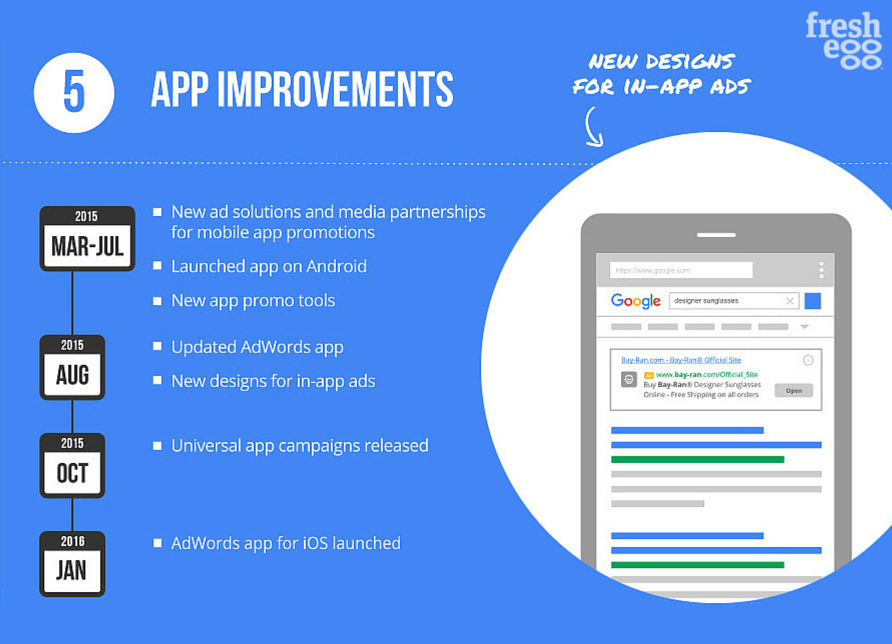 As smartphones are now part of everyday life, staying on top of app updates is a necessity. As a result of this, Google has brought out a number of new features and updates to its AdWords app.

Between March and July, AdWordslaunched its app on Android, as well as expanding where you can promote Android apps across the entire Google Display Network. 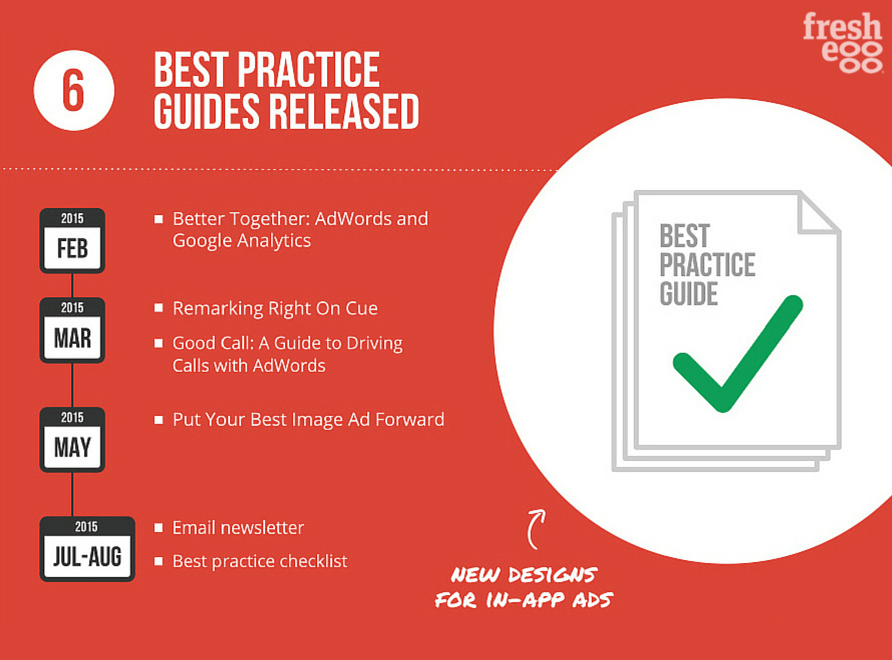 Over the past year, Google AdWords has produced six different best practice guides to help users get the most out of their AdWords account.

The image below shows an example of a Google Analytics table displayed within Google AdWords.

Also in March, the ‘Good Call: A Guide to Driving Calls with AdWords’ best practice guide was launched, which helps advertisers decide:

Across July and August, AdWords created a best practice email newsletter. This is a monthly email containing useful insights, such as quick videos and recommendations for advertisers using AdWords.

As well as this, Google introduced a best practice checklist that contains useful recommendations and tips to help users optimise Dynamic Search Ads.

As a result of AdWords updating and launching a lot of new tools and features, these best practice guides help advertisers stay on top of what is changing within the AdWords interface.

Overall, AdWords is constantly changing its interface to help advertisers get the most out of their paid advertising. It’s so important to stay on top of these changes, as more and more updates aremade to Google AdWords. Paid advertising is becoming more sophisticated, so by keeping yourself up to date with these changes you’re ensuring that all your campaigns are running as efficiently as possible.

Here at Fresh Egg, we have an experienced biddable team that has a vast knowledge of the AdWords interface, as well as being certified by Google AdWords.

We’ve helped clients with their paid advertising for years. If you are interested in advertising online and want to get the most of AdWords, contact our team to find out more.