Teams and Slack kept us in touch, but there is no substitute for being together!

It was a big day for everyone at Fresh Egg this last week. For the first time since 16 March 2020, we took the opportunity to get everyone together for a long-overdue social event. It was finally time to celebrate in what has been a crazy, challenging, and demanding time for all sorts of varied reasons. Read on and find out what that meant to us.

It is fair to say that if the last 18 months have taught us anything, remote working is not the same as being together, meeting people, sharing ideas, discussing challenges, sharing knowledge, learning, and working as a collective.

It highlighted and amplified the family vibe that Adam, Pip, and I always wanted to create. We are fortunate to have such a fantastic group of talented people who choose to work alongside us.

Those who started the day by coming into and working from the office had the treat of meeting Brook and Higgins (two new beautiful Border Collie puppies belonging to our Co-founders Adam and Pip). There have always been dogs in the office, and sadly during the pandemic, it would be that both Dodger and Jake (who had been with us since puppies) would not return. To see their pesky, cheeky (and fluffy) descendants was an absolute joy.

Having been to the office numerous times since the pandemic commenced, and feeling the eerie quiet, the lack of life, it was brilliant (and long overdue) to see people using it as intended. As I worked, I observed the conversations, the desk chats, the laughter, people in meeting rooms, and the obligatory coffee runs all happening naturally – it was a sight for sore eyes. Life felt normal again! It's sometimes easy to forget that up until recently, many of us have had little 121 contact.

We are lucky to have such an expansive office, it certainly helps us all maintain a distance, and while there are a few COVID housekeeping rules to follow, it is fair to say, it felt like we had never left.

Since the new world kicked off in March 2020, a lot has changed. For our return to togetherness, we took the opportunity to assemble at the newly opened Brewhouse in Worthing. Blessed with a gloriously warm and sunny September day (summer, anyone?), it automatically made life feel 10x better. If you have not been there yet, it's a great venue. For anyone local to us, do check it out.

I am so proud of how everyone across the business has adapted during the pandemic. Inducting 18 new members during this time has been no mean feat, but everybody has embraced making them feel welcomed and part of the team, albeit remotely.

Seeing everyone together again on Wednesday was amazing – the atmosphere was buzzing with tales of old, people catching up on so many missed months, and finally meeting new colleagues face-to-face! It was clear that people had missed normality and certainly missed each other, and I hope that feeling will encourage everyone to want to be together more in the office from next month.

Finally, a chance for everyone to meet all our fantastic new starters

After a time, and once the world had grappled with the enormity of the change, enquiries started coming in. The same challenges for businesses and organisations existed, and now exacerbated by the fact that the world had gone online, the physical had become virtual, leading to a need for us to recruit to help with the ever-increasing demand for our services.

It's been a record-breaking year for us, we've welcomed many new faces across the business, and a few old faces have returned.

As well as the 18 new starters that joined while we've been away from the office, we also had three team members join us just as we closed the office, so for recruitment, it's been a busy time, and a testament to everyone for making all our new team members feel welcome and part of the team.

None of our new starters had been to our Sussex HQ, taken in the office, or met anyone face-to-face from the organisation during the recruitment process. We transferred inductions to the virtual world, and Slack and Teams became the go-to locations for a catch-up over coffee.

We want to think we've done the best possible job in making all our new starters feel part of the team, but it's never quite the same without that contact.

While there have been pockets of get-togethers in recent months, they were never on a grand scale. Post-Wednesday, post food, post-beers, I think it's safe to say all of our new faces (hopefully) feel firmly part of our family. Let's not forget the stalwarts

We are incredibly proud of our team, and along with all the new faces, there have been some milestone anniversaries this year!

Let me say it's a fantastic achievement that almost 50% of the team have now been with us for over five years (which in the digital world is no mean feat). Now, we celebrate four more people who have been with us for ten years. Joining our distinguished stalwarts gallery, we have our Head of Search and Data, Mark Chalcraft, Account Director Lisa Rippon, Visual Designer Nathan Kingstone and IT Operations Director Gav Brooks. All will now get their names in lights in our office very soon.

If any industry was going to make working from home a success, then it was the world of digital. After all, what can’t you do with a net connection, a laptop and the appropriate software? While the benefit of being in our particular industry allowed us to carry on as normal (well, as near normal as possible). It is fair to say that if the last 18 months have taught us anything, remote working is not the same as being together, meeting people, sharing ideas, discussing challenges, sharing knowledge, learning, and working as a collective.

Thinking about joining our fantastic team?
See our latest jobs

What a fantastic afternoon. Seeing everyone as a team made me reflect on the past year or so. It confirmed what a great bunch of people we have working at Fresh Egg. Although we’ve all been regularly catching up on video calls, nothing beats having a laugh and celebrating the good times in person. Everyone has pulled together throughout some uncertain times and has contributed to making the company a success, and it was great to thank people in person for all their hard work.

Being together makes you think

For all our new starters who finally got to meet us all, we hope the wait was worth it and that yesterday was a justification of your decision to join us. Fresh Egg came from very humble beginnings, and as we regrouped, it was warming to see colleagues old and new getting together with many experiencing their first Fresh Egg social. 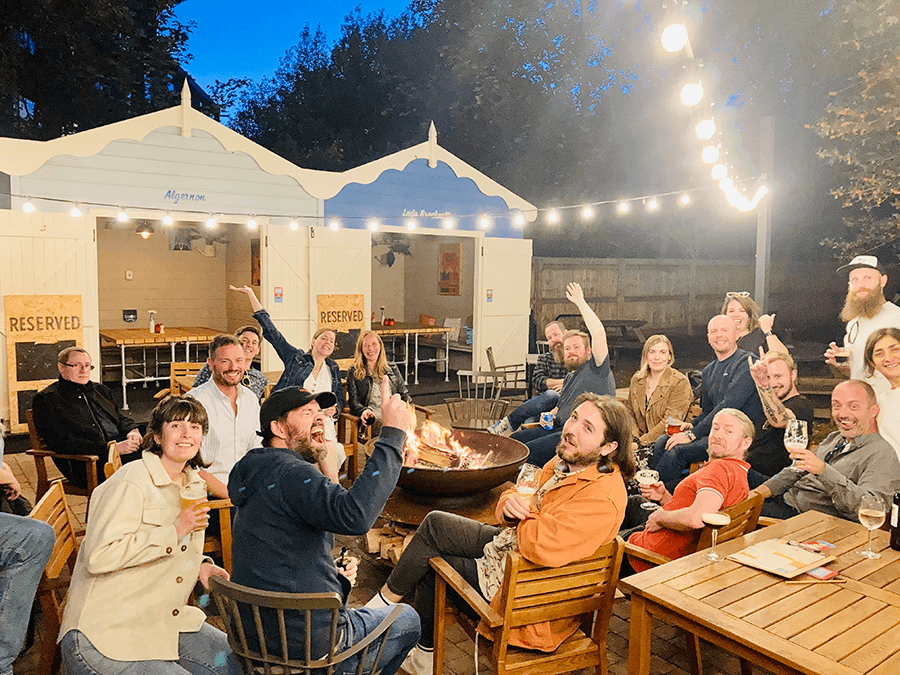 It highlighted and amplified the family vibe that Adam, Pip, and I always wanted to create. We are fortunate to have such a fantastic group of talented people who choose to work alongside us.

We are all keeping our fingers crossed that this is the start of things to come. No more hiding away. We plan to get back to the office in the coming weeks, but it is purely voluntary. There are no demands for anyone to feel the need to return. After all, we have proved that we can work remotely as a business, but after our time together at The Brewhouse, it has amplified there absolutely is no substitute for being together.

How Fresh Eggers kept positive during the Pandemic

What it's like starting a new job remotely, and tips for remote starters

Join our email list like thousands of other marketing professionals to get updates on key industry changes, early access to free resources and exclusive invitations to Fresh Egg events in your inbox.